Hyderabad, the city of Nizams has over these years seen changes in its culture and living styles.  Yet the city beholds and carries culture from its rich past of Persians, Mughals and Qutub Shahi Dynasty. This feudal structure descended the Deccani tehzeeb and zabaan amongst the Muslim population of Hyderabad. Most Muslim women here still follow Salwar kameez, burqa and hijab attires, while men wear kurta payjama. The population of Hyderabad is legibly contradistinctive with a prominent Hindu as well as Muslim communities, natives and traditions of north and south India and at the same time Urdu and Telugu speaking people. 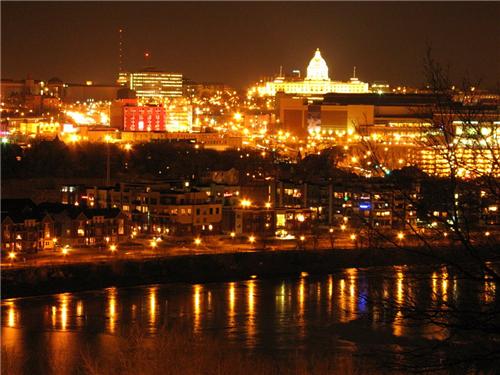 Cultural Changes Due to Advent of IT Hub

The software market saw more accomplishments turning the city into an IT hub, and the city gathered crowd from rest of India. The city united modern and sophisticated crowd that remodeled the culture and style of the city. The youngsters can now be spotted in casual jeans and T-shirts. These immigrant crowds of Banjara Hills, Jubilee Hills, Madhapur and Begumpet turned the city into a cosmopolitan. Lounges, pubs and nightclubs and nightlife are the new found love of young Hyderabadis. The locals of the city are consolidated in old Hyderabad  while the non localities mostly live in the up market areas of Hyderabad. From the well known pearl markets, Hyderabad’s shopping culture has shifted its base to the shopping malls and branded showrooms.


Food and festivals of Hyderabad

Hyderabadis will not forget to oblige you with the timeworn Mughlai cuisine called Hyderabadi Biriyani. Unlike other metro cities where the local cuisines are getting subdued by gourmet dishes, the flavorful biriyani will remain the temperament of this city. Badam ka jail, mutton korma, haleem, kebabs and paan are other specialties of the place not worth missing.

Ganesh Chaturthi, Bonalu, Eid ul-Fitr and Eid al-Adha are the festivals, Deccan Festival, Lumbini Festival, Diwali are a few festivals celebrated here with a great zeal by the occupants of the city. 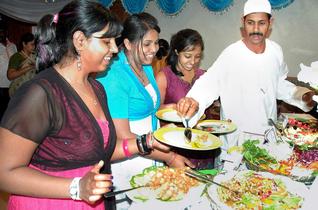 This food festival is the most popular food festival organized annually by Tourism department of Andhra Pradesh government. The Hyderabadi Biriyani, Mirch Ka Salan, Baghare Baingan, Borugu Undalu, Veppudu and Jonna Rotte are special servings of this festival to represent the city. Nizam Gharanas’ delicacies with its original recipes and tradition are laid out in this festival.

The event is annually organized at various renowned hotels of the city. Array of specially prepared Bengali food is on offering at this festival. Chachchari, Macher Jhol, Misti Doi, Bengaloads, Sandesh, Malpua, Payesh, Chum Chum, Rassogolla or in fact all the Bangla dishes are served in this festival.

The mouth watering mangoes are on display in this 3 day festival celebrated every year in Hyderabad. About 300 varieties of mangoes and mango-based products capture hundreds of visitors from various cities. Local and southern mango varieties dominate among the varieties on showcase. Panchavarnnam, sindhoora, dhaseri, neelam, alphonso,  kotturkkonam, banganapally, kilichundan, kalpadi, mallika, amarapali, sendhura, totapuri,  sakkara gutty, malgova, and rose mary from Tamil Nadu, Kerala and Karnataka are brought to Hyderabad for festival.  During the last festival, a 4 Kg green colored Jawan Pasandh, mango was on display, capturing attraction of the visitors.

Hyderabad saw the first HIIF event in March 2007 providing a platform to varied works of Telugu cinema. The second edition of the festival was organized in 2008, and thereafter, a short film festival or Children’s film festival is unionized every year in the city.

Crafts and Architectures of Hyderabad

Hyderabad is integral to royal architectures archeological sites literature and unique arts. Marvel of Charminar and Golconda is almost synonymous to ‘Hyderabad’ and is the ego and heritage of the city. The architectures of the city depict the influences of both ancient Hindu and Islamic religions, which has ultimately finalled into a mix of both cultures. The rulers of Hyderabad have left their impressions in these famous monuments. Falaknuma Palace, Purani Haveli, Asman Garh Palace, Qutub Shahi Tomb, Warangal Fort and Medak Fort are a few such places to peep into the royal past of the city. 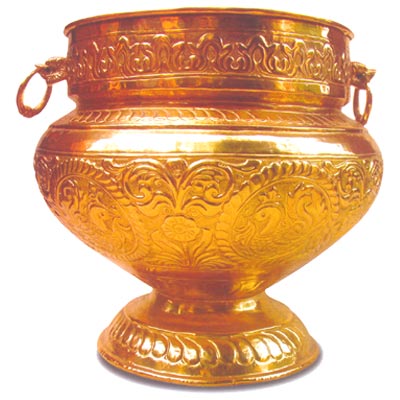 Hookahs, black gun jewellery, bags and belts with mirror works and brass from Pembarthi are associated with Hyderabad’s culture and tradition that still enlivens and depicts the uniqueness of this place. Bidriware metal handicraft is a special form of craft that dwelled only in Hyderabad after it was brought to India from Middle East.  Hyderabad produces highest quantities of Bidriware.

The Nizams were great patrons of literary works, poets, and scholars. They promoted a lot of literary reforms. This fondness to the literature works is still flourishing in the city at Sahitya Academy, Urdu Academy, and Telugu academy. The city attracts many international scholars. The Government promotes and organizes Golconda Music and Dance Festival, the Taramati Music Festival, the Premavathi Dance Festival annually to keep the specialties of the city alive.